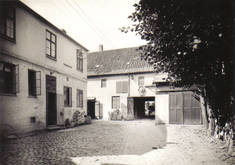 A trading company gets established on October 9, 1855, at 12, Fredens Torv in Aarhus. The initiater is merchant J. C. Seidelin (above to the right) who now opens the first specialized business in building materials in town named J. C. Seidelin. He is selling products such as bricks, roof tiles, slate, cement and pipes. Until 1855 building materials were only sold on a small scale by several local business men who bought their merchandise from Danish brick works and Copenhagen importers. So far, no direct import of foreign products into Aarhus had taken place, but Seidelin changes that.

When Seidelin opens his business Aarhus has approx. 10,000 inhabitants. Tihe local newspaper of the time, Aarhuus Stiftstidende, takes care of local news. On July 4, 1855, you can among other other things read, that several cases of rabies have lead to an order, that all dogs have to remain tied or wear a muzzle. In an attempt to keep down the number of abandoned dogs, all dogs must wear a special dog-tag. On october 5, 1855, there is a note that the body of a robbed male person with his throat slit has been found on the line between Aarhus og Marselisborg fields. And on October 16, 1855, it is possible to be kept updated on local market prices. Rye costs 5 rigsdaler and 3 mark, butter is 2 mark per pound, eggs 2 mark a score, and the price for a good milch cow is 6 rigsdaler. One mark equals at this time approx. 0.33 oere.

The speciality businesss J. C. Seidelin is not only well run, it is also large after the circumstances, commodity prices and the economy at that time, The annual sales from e.g. the period 1873-1882 are approx. 80.000 kroner, and the stock will typically reach a value of approx. 10,000 kroner. Seidelin is known as a skilled and straight merchant, and when there are plans around 1870 of founding the first private bank in town, he is chosen to become it's first director. He commences as director for Aarhuus Privatbank (later known as Provins-
banken), while at the same time running his business, but in the long run he cannot maintain both tasks.

Seidelin therefore decides to sell his business, and as at Januar 1, 1884, Louis Hammerich (Pater), seen above to the left. takes over the business and the property at 12, Fredens Torv which also holds a private residence.