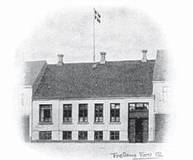 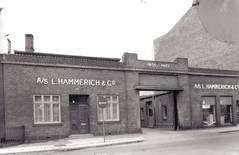 I 1927 A/S L. Hammerich & Co. build new and larger office and warehouse buildings in 57-59, Groennegade, where also the stocking area was earlier extended. The propery at 12, Fredens Torv is being sold, and in October 1927 the company moves it's entire business to Groennegade (Aldi has a store there today). Here, a showroom for the exibition of new building materials is also established. Products that are far-reaching and ajusted to the requirements and demand of the time. Annual sales reach 1¼ million kroner.

In 1928 the representation of glazed stonewear pipes from Halse Klinker, Born-
holm, commences. Over the years this company becomes one of the most impor-
tant suppliers, and the firm becomes the biggest Hasle dealer in the country. The following years the company delivers ma-
terials to Aarhus Person and Goods Sta-
tions, Aarhus Custom House, Aarhus Thea-
ter, Aarhus Port and Aarhus Oil Factory besides hospitals, other stations, slaughter-houses and dairies. In contrast to the earlier years, where the main part of sales derived from the Aarhus area and Middle Jutland, an ever increasing part is now wholesale from stock and direct deliveries from Danish and foreign factories to buyer's place.

In 1929 a festive pamphlet is distributed in celebration of the 75th year of the founding of the business. Louis Hammerich is in his old days one of the many supporters in establishing Aarhus University, to which the firm has large deliveries over the years.

Only a short time after A/S L. Hammerich & Co. move into new and modern facilities, a generation's change takes place. Louis Hammerich dies in 1931 efter 47 years in the company. In Aahus circles he is mostly known for his voluntary work, i.e. as the guardian for Aarhus Cathedral and his engagement in Aarhus Theater and The Old Town. Barrister P. Stampe becomes chairman of the board, and Paul Hammerich, who was already appointed co-dierector in 1927, becomes sole director. Under his leadership the company developes into a significant nation-wide wholesale company. In 1933 the 50-years anniversary of L. Hammerich's trade licence is marked by a donation to Aarhus Universitet in the amount of 5,000 kroner for a student's college room. However, Paul Hammerich only gets a few years as leader of the company, when in 1936 he dies only 43 yaars old.

V. Kier succeeds P. Stampe as chairman, and Aage Filtenborg becomes the new director. He has been employed for a number of years and was given sole procuration in 1933. Aage Filtenborg is a personality and a foresighted businessman. He continues the development of the firm towards a leading nation-wide wholesale company. Louis Hammerich's oldest son in law, colonel J. D. v. Stemann, joins the board serving for a great many years.