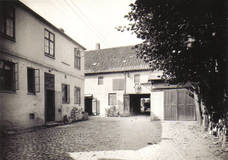 Continued growth causes the wish to change the company which at the time is named L. Hammerich Speciality Busines in Building Materials, into a limited company. Thus on September 29, 1911,

is established under register number 645 with a share capital of 200,000 kroner. The confidential clerks Niels Christensen and Thomas Christian Nielsen are co-founders, hence the Co. in the company name. However, they leave the company in 1913 to establish the competing firm Christensen & Nielsen. A/S L. Hammerich & Co. continue all matters from the  former company and takes over the properties at 12, Fredens Torv and 57-59 Grønnegade. A/S L. Hammerich & Co. is hereby a family owned limited campany with Louis Hammerich as director and sole shareholder.

During World War I the company is affected like other building firms by a stand still within imports and a stagnation in building activities. Hammerich's oldest son Louis Aage Hammerich, LL.B., joins the board. During these years commodity prices treble or quadruple. The company's sales drop significantly during the war, but the company is well prepared and takes part in the boom that takes place after the end of the war. And in 1920 sales increase drastically and surpass 1 million kroner in spite of the fact that from 1922 to 1925 commodity prices drop to a third of the prices during the war.

During World War I Louis Hammerich buys the farm Provstgaarden in the hills of Mols near Ebeltoft in Jutland as a holiday residence for his family. Here the members of the familiy get together when possible or to celebrate larger events. The trips to Mols is done by horse carriage, so it goes without saying that they cannot meet every weekend.

In 1923 Louis Hammerich's son Paul Hammerich (top left next to Pater) is employed as a confidential clerk after a commercial education in Denmark and abroad. The idea is, that later on he shall take over as director after Louis Hammerich thus making a change of generations in A/S L. Hammerich & Co. The confidential clerks Christensen and Jensen leave the firm to found their own company of the same name in Copenhagen. The board gets supplemented by captain Carl Hammerich, the second oldest son. In 1924 the firm gets the sole representation for Jutland of glazed claypipes from Steinzeug GmbH, Germany.

In 1925 L. Hammerich is appointed chairman of the shareholder's commitee in Aarhus Privatbank occupying this post until he dies.