In 1974 the company moves it's warehouse facilities from Vestre Ringgade to a plot of 50,000 m2 at P. O. Pedersens Vej 14, Skejby in northern Aarhus. With a warehouse of almost 5,000 m2, 117 metres long and 42 metres wide and holding 3,500 pallet spaces at a total investment of 9 million kroner, the company is secured modern stock facilities for quite a while in the future. The property at Daugbjergvej is sold to the timber merchant, Det Danske Trælastkompagni. The expansion gives valuable media coverage during the building period. Annual sales in 1974 amounts to 52 mio. kroner.

The company is also building in Troldhede. A new factory section is built and opened in 1974 in spite of the oil and building crisis and the common recession, and funds are allocated to intensified sales efforts. In 1977, however, a powerful, foul fire ravages A/S Troldhede Pladeindustri, and the old factory section burns down. Fortunately, insurances cover the damages, and production can soon continue.

After some years with increasing building activities, the 1980’es, however, begin with a building crisis - in the wake of the oil crisis. Demand for building materials is rapidly decreasing, the new warehouse facilities in northern Aahus become a liability and the property is sold to the next-door neighbour, Kosan Crisplant. At the same time a radical restructuring of the program takes place, as it is decided to settle solely for Troldtekt and only a few trading commodities. In connection with the restructuring the company parts with its bricklayer and contractor customers. The firm changes into a pure wholesale business, and dealing in tiles, clinker and traditional  building materials is being discontinued. Up to now sales have primarily  comprised of trading commodities, but in consequence of the restructuring some 90 per cent of the program disappears. The remaining articles are moved to Troldhede, where there is ample space.

In 1981 director Carl Erik Olesen dies far too early, and Peter Hammerich continues as sole dirctor. In 1982 the company is reorganized, and the sales organization gets shut down. This drastic remedy means a painful parting with a number of valued employees. The remaining staff is moved to A/S Troldhede Pladeindustri, and Peter Hammerich leaves the company. The company moves to new offices at Klamsagervej, Aabyhoej, and assistant manager Knud Thomasen takes over daily management.

In the beginning of the 1980’es the company also acquires the last of Hedeselskabet's shares. Those belonging to Axel Prior were puchased in the late 1970’es, and A/S Troldhede Pladeindustri is hereafter a fully owned subsidiary company. In the same period Evers & Co.’s wood-cement factory, Træolith in Thyregod, is bought and immediately closed. Troldhede Pladeindustri is thus absolutely dominating in the Danish wood-cement market. The time is characterized by many dealers and a large supply of building materials, and at the same time building activities are at a standstill although sales of Troldtekt are increasing.

Director Thorkild Bjerglund Andersen, who is a long-standing member of the board, is working hard on the development of A/S Troldhede Pladeindustri. Han is the owner of Aarhus Savvaerk and an experienced business leader. The fast growing demand for Troldtekt makes it  possible to begin refining the program and improving the production in Troldhede. The company makes money again which is being reinvested in the production.

The progress continues, and the company invests heavily in Troldhede Pladeindustri. The production gets modernized, and investments are made in a new and more efficient kiln as well as in a new cutting, phasing and painting plant.

In 1988 Thorkild Bjerglund Andersen buys out the family and takes over A/S L. Hammerich & Co., where he has been on the board since 1973. He lets Sven Hammerich continue as director of the company.

In the mid 1990'es Thorkild Bjerglund Andersen buys the manor Oestergaard, situated between Malling and Solbjerg (south of Aarhus).  At the end of 1997 A/S L. Hammerich & Co. move from Hoejbjerg and settle in the premises at Oestergaard.

In Troldhede the automatization and improvements continue. Machines are getting replaced and upgradet. The handling of i.e. raw wood, which previously required the manpower of up to six people, now demands only one. Planners, that were previously manually controlled, get automized. And eight men run what earlier gave work to twenty peopler. At one time the total staff in Troldhede amounts to 80-100 men in two shifts. As a consequense of the improvements the number gets reduced to approx. 50 people, but now in four shifts.

At the end of the 1990’es the market discovers new areas of use for wood-cement and the acoustical solutions from A/S L. Hammerich & Co. In 1998 Troldtekt achieves the interior climate marking according to the system of Danish Interior Climate Marking. All in all the company is in a period of encouraging development where production and products are concerned, and that is going to affect the future of the business.

The years from 2000-2005 constitute a distinct period of development for the company which has regained its economic strength, and consequently the firm begins to cultivate new markets - also abroad. The market gradually realizes the new areas of use for wood-cement based on key-words like good acoustics, effective fire resistance and a healthy interior climate. Originally Troldtekt was made as a boarding and insulating material for walls and ceilings in industry and farm buildings. But slowly the woodwool boards undergo a refinement towards acoustic-adjusting boarding for walls and ceilings in private houses, offices, classrooms, institutions, banks, churches and other places.

In A/S L. Hammerich & Co., where sales manager John Enevold Poulsen can celebrate his 40 years anniversary in 2002, they are happy to launch a number of Troldtekt novelties. A series of acoustical products with e.g. built-in light, sound, ventilation and decoration is introduced. The acoustical solutions are being developed in co-operation with competent specialists like architects, and the novelties are going to be some of the most widely used products in Denmark for securing good sound and interior climate.

In 2005 the administration building in Troldhede is being honoured with a prize of embellishment by The Citizen's Society of Troldhede and Environs. Previously the building was inhabited by factory managers over time; today it is used as the reception and office of the company.

On October 9, 2005, A/S L. Hammerich & Co. celebrate their 150-years anniversary. The jubilee is only marked as an internal event.

Right after the death of Bjerglund Andersens in February 2005 Peter A. Poulsen leaves the company. Director Keld Toft Lauritsen takes over as a working member of the board until Peer Leth is appointed new director of the company in 2006. The company name is changed to

The adjustment of the production from making traditional ceiling and wall boarding to producing creative acoustical solutions for the entire building sector continues. The company gradually changes from being a supplier of Troldtekt acoustical  solutions to supplying complete systems combining dashing architecture with optimal acoustics and the newest technology. Built-in light, sound, ventilation and decoration are part of the on-going development of what L. Hammerich A/S call the multifunctional ceiling surface. Since the mid-1980’es the company has experienced a growing demand, and 2006 becomes a record year. Now, sales are also going to export.
In 2007 the company's departments for sales and administration are situated at Oestergaard near Malling with 14 employees. The production in Troldhede counts approx. 60 employees. A/S Troldhede Pladeindustri's floorage of buildings has quadrupled since the fire in 1977 and amounts in 2007 to approx. 25,000 square-metres of buildings.

In 2005 the administration building in Troldhede is being honoured with a prize of embellishment by The Citizen's Society of Troldhede and Environs. Previously the building was inhabited by factory mana-
gers over time; today it is used as the reception and office of the company.

On October 9, 2005, A/S L. Hammerich & Co. celebrate their 150-years anniversary. The jubilee is only marked as an internal event.

L. Hammerich A/S is one of the oldest limited companies in existence in Danmark with the Reg. No. 645 from 1911. The company's most important export markets are Holland, Germany, the Baltic states and Finland. But also far away markets like Canada and South Korea have become acquainted with Troldtekt acoustical boards. The company produces more than two million square-metres Troldtekt boards a year.

All Troldtekt products each with their particular characteristics go under the collective name Troldtekt Acoustic, which is also reflected in the graphic expression. The simplification of product and logo is part of a larger process which also comprises a renewal of the company web-site www.troldtekt.dk. And in 2007 the first issue of the Troldtekt Magazine is published, addressing the company's most important relations: Dealers, customers, co-operative partners and employees. The magazine is one of the initiatives in the development towards better visibility and closer customer relations. Today it is also available on the Internet.

L. Hammerich A/S moved from Oestergaard at the end of 2007 to more suitable locations at Sletvej 2-4 in Viby, near Aarhus. In 2009 sales of the remainder of the traditional building materials were discontinued. On January 1, 2010 the company alters it's name once again. This time to

so that products and company bear the same name.

The relations to the Hammerich family are hereby merely history. The decision is understandable after a number of years under new ownership. Later in 2010 A/S Troldhede Pladeindustri celebrate its 75 års anniversary.

The company is in continuous good shape and is largely unaffected by the present financial and building crisis. 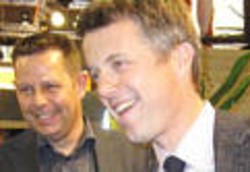 In 2010 Troldtekt A/S is awarded the Building Environment Prize. The company gets the prize for their PEFC-marked acoustical boards which contribute to a sustainable environment during production, use and removal. There were lots of pride in the firm when H.R.H. Crown Prince Frederik on March 16, 2010, handed the newly established Building Environment Prize to the CEO of the company, Peer Leth at the TUN BYG in Fredericia, which is the leading building trade show in Scandinavia.