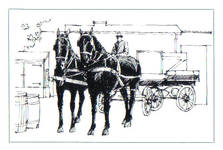 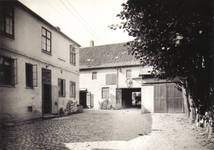 At the age of 25 years Louis Hammerich takes over the specialilty business at 12, Fredens Torv after merchant J. C. Seidelin, and the business changes it's name to

Louis Hammerich has completed a commercial education with Hans Broge ("The Tietgen of Jutland", see above right), who runs a large business of nation-wide fame with products like corn, coal, butter and groceries. In a recommendation from Hans Broge in 1883 the following was said: 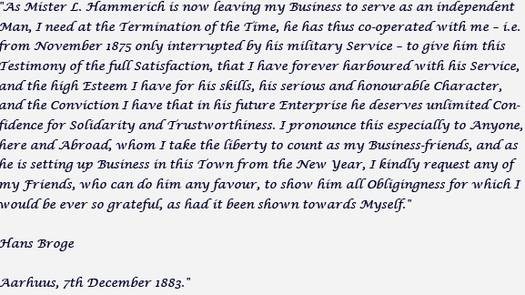 "Although I had no Knowledge of the Nature of the Business that I had taken over, I was lucky enough already the first Year to increase Sales from 70,000 Kroner til 120,000 Kroner."

At the end of 1880’es the first cement factories are founded in Danmark. Merchant Louis Hammerich takes part in establishing the cement factory "Dania" at Mariager Fiord and acts as sole agent in Århus until 1928, when the factory is merged into The Danish Cement Central in Copenhagen.

In 1889 L. Hammerich Business in Building Materials is appointed main dealer in Aarhus for Hasle Klinker, Bornholm, just as the production commences (the company reamins main dealer right until the middle of the 1970’es). Imports af roof slates from Norway and Port Madoc in Wales are taken up along with English and Swedish tiles and fireproof tiles. Together with brickworks owner Rolf Heide the business buys the brick work "Kragelund" in Hoejbjerg south of Aarhus in 1901. The brick work makes approc. 3 million bricks a year, but is sold again in 1918.

In 1894 Louis Hammerich buys the schooner "Ellen Margrethe" of Aalborg. The ship charters among other things cement from Mariager, roof tiles from works at Flensborg Fiord, fireproof materials, tiles and glazed cribs from Bornholm and Sweden. However, the small shipping venture is not profitable in the long run, and the ship is sold in 1904. The story of the ship does not, however, end here. Changing owners, changes of name etc. is the destiny of the ship over the years, and up till today (2007) it is still in existence. The company´s assortment is extended with roofing felt, tar, wall and floor tiles and later on reedmats from it's own factory in Allingåbro (near Randers).

The company's sales are growing steadily these years, and to meet the increasing demand the company L. Hammerich buys "Mrs. Kaspersen's Place" in Groennegade in Aarhus in 1894. The price for this additional stocking area is at the time 14,500 kroner. In excess of Danish building materials the company takes up sales of foreign building materials. So far the company has purchased the majority of them via Copenhagen import companies, but gradually the program gets extended with articles imported directly from the foreign factories, such as English and Germean cement, roof slates from Norway, the Rhine-areas and Port Madoc in Wales, English and Swedish tiles as well as fireproof stones. The increase in demand and a beginning wholesale business means, that by the turn of the century annual sales in L. Hammerich Business in Building Materials exceed 300.000 kroner.

In 1909 Louis Hammerich celebrates his 25-years anniversary as an independent merchant.