In 1935 A/S L. Hammerich & Co. discovers a factory situated at Troldhede in western Jutland named Troldhede Pladeindustri. The factory was a clothes factory in the 1920'es, but now it manufactures building materials of fir and pine tree in an area, where the land is cheap, labour is ample, and the raw materials are ready at hand. The products are named Danatex and Troldtekt.The Hammerich company spots the potential of the products which are cheap and solid. And exactly this combination is important in the wake of the  building crisis at the beginning ag the 1930’es. At this time there is an overall need of good and cheap buildings.

Where in 1866 there were areas of moor and in 1902 fir and pine plantations, a modern manufactoring plant is ready in the 30’es to produce the only Danish wood fibre board, Danatex, and a parallel production of the wood-cement board Troldtekt. In a pamphlet from 1936 it is said:

"As part of ’Det Danske Hedeselskab’s' Work for better Utilization of the Jutland Forrests and Plantations and to counteract local Unemloyment A/S Troldhede Pladeindustri is established with a Factory in Troldhede, where two new 100 pct. Danish Insolation and Building Boards are manufactured of wood from Hedeselskabet's Plantations: Danatex – pure woodfibre Bords and Troldtekt – light building Boards of Danish Wood and Danish Portland Cement." [Troldtekt – earlier and now, 1936].

The factory in Troldhede employs local people at a weekly pay of approx. 10 kroner. Other than providing local jobs the factory is also one of the first buildings in Troldhede with electric light.

The company buys a substantial number of shares in A/S Troldhede Pladeindustri, and Paul Hammerich joins the board. There are great expectations to the factory which at the time is owned by by local farmers and forest owners. Together with the Copenhagen trade company, Axel Prior Aktieselskab og Det Danske Hedeselskab A/S L. Hammerich & Co. later buy out the other stockholders. Hedeselskabet, however, gradually plays a more secluded role but continues to be a guarantor for the wood supplies.

Aage Filtenborg is the energetic power in the further development of A/S Troldhede Pladeindustri. He steps up the production and improves sales and marketing. The products compete with similar boards, which for years have been imported from abroad for insulation of walls and ceilings. With the continued production of Troldtekt and Danatex A/S L. Hammerich & Co. show that they focus on modern building materials combining important qualities such as strength, insulating properties and low weight. The expectations to the Danish wood-cement boards are great, and they are predicted a promising future, where the use in the modern Danish building industry willl lead to substantial savings for heating of buildings within industry and farming. 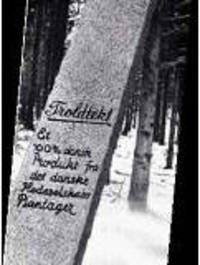 Troldtekt
The Troldtekt wood-cement board is an insulation and light weight board, made solely of Danish wood from the plantations and forests of Det Danske Hedeselskab and Danish cement.

The production of Troldtekt begins around 1930 at Troldhede Pladeindustri in Troldhede in western Jut-
land. Characteristic for the wood-cement board is, that coarse chips of wood wool are being mixed with grey cement. When wood is sorrounded by cement, it can neither burn nor rot. Apart from insulating against cold, heat and sound, the Troldtekt board is also fire-
proof which is important. This is the insulation board, on which A/S L. Hammerich & Co. much later choose to consentrate their efforts 100 per cent. In 1937 Troldtekt is described as:

"Insulation and Light building Boards, consisting og mineralized Wood Wool (Wood from the Plantations of Det danske Hedeselskabs) and Danish Portland Cement. Troldtekt insulates against Heat and Cold more than 10 times better that Bricks. A 5 cm Troldtekt wall insulates nearly as well as a two Stone Wall. Troldtekt is very resistent against fire (fire proof) and insensible to Frost. Troldtekt er sound dampening, weather proof, easy to handle and process, can be sawed, drilled and nailed in. Troldtekt is usable in any Type of Building in Connection with Wood, Iron, Concrete, Brick or as an independent Partition. Besides, the Material can be widely used  in rebuilding and restoration of old Buildings." [Troldtekt protects against Cold, Heat, Damp and Noise – 1937].

Apart from being a cheap and strong material the requirements of the appearence of the boards are limited at the beginning of the production. As a insulating material the wood wool boards are gradually superseeded by other materials. The Troldtekt boards, however, currently undergo a refinements towards akustic ajusting lining boards for ceilings and walls. The grey cement gets supplemented by white cement, the coarse wood wool by a finer wood chip, the finish of the boards gets optimized, and in 1998 Troldtekt achieves the interior climate marking in accordance with the Danish Interior Climate Marking System. Due to the fine sound absorbing and and fire impeding properties Troldtekt quickly gains recognition among technical advisors and architects. The natural rustic appearence of the boards harmonizes well with other natural materials such as plank or parquet flooring, but is also increasingly preferred as contrast to modern materials like glass og steel.

Danatex
Like Troldtekt the production of Danatex begins around 1930 at Troldhede Pladeindustri, where Hedeselskabet is co-owner. Hedeselskabet enters into a co-opeation with the Technological Institute concerning the development of a Danish wood fibre insulation board, which is to compete with foreign boards. The co-operation is fruitful, and in 1935 A/S L. Hammerich & Co. joins the factory with other investors. It is considered vital that it is a 100 per cent domestic product that secures jobs for local people in the plantation and on the factory. In a folder from 1938 it is said:

Besides it's insulation properties Danatex wood fibre board has the unfortunate characteristic that it can burn. Sharpened requirements from the fire authororities lead to a ban on the use of Danatex i public buildings, and that affects the general demand. This urges the neccessity for the development of harder pressed boards, that will meet the new demands. The newest developed board, Danpanel, is, however, made in inexpedient measurements. On top of that, the production of Danatex and Danpanel is highly energy demanding, and by the end og the 1970’es the management chooses to discontinue the production.