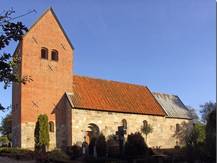 Being one of the oldest known Danish families the Bering name goes back to the middle of the 1400's. Records show that an innkeeper named Jens Andersen around 1496 lived on a large farm in the village Bering, near Viborg. He had tree sons who all added the name Bering to their surname Jensen after their father. The oldest Anders Jensen Bering (Jensen was later skipped) is the ancestor of the Bering Randers line, the second Peder Jensen Bering the ancestor of the Viborg line. Of the youngest son Mads is little known.

At least two Vitus Berings are known to the public. Best known is the famous seafarer from whom were named the Bering Sea and the Bering Strait. Also the pastor and historian is well known (an awful lot of Berings were pastors, and Peder was the first name mostly used). The Berings and Liisbergs were linked together, when two Bering sisters married Liisbergs of two different generations. From then on the name Bering Liisberg was known.