As elsewhere mentioned our family goes back to Johannes Hammerich from approx. 1550.

Having roots  in Friesland and Schleswig-Holstein where the name is pretty common, it can be difficult to trace personal details far back even though attempts have often been made. Going far enough back Germany was not one nation but consisted of a number of independent duchies of different sizes. Among them Schleswig and Holstein were old Danish possessions until Germany eventually won them in the 1864-66 war.

For a long time we thought that the family crest shown above to the left was created some time in the 18th or19th century, when the family still lived in the former Danish duchies in today's Germany. This point was being investigated some years back, when we approached German heraldic archives in Berlin for information. However, they did not know our family crest. The most reasonable explanation is probably that Pater was requested to create a family when he was decorated, and he may have talked to others in the family. At the same time we discovered that other parts of the family use variations of our family crest. We are a large family, and of course different heraldists have different ideas. The family of Kai Hammerich (Jutlandia), Copenhagen, seems to accept two versions both of which are different from ours, although they hold the same basic elements, first of all the helmet with the flower, the two stars and the rosette. The motto "Omnia Cum Deo" (Everything With God) has been in the family for centuries. 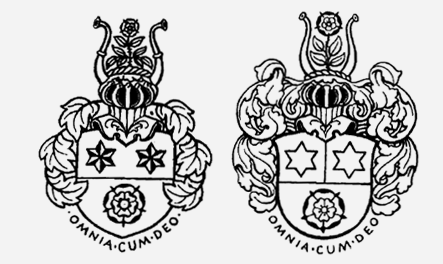 However, as all three versions in fact illustrate ancestral nobility which to the writer's best knowledge does not exist, they do not in heraldic terms show the true picture. Besides they are by some members of the family considered somewhat outdated in design. A friend of one of the Norwegian cousins, the designer Jens Quistgaard, now diseased, was also a heraldist, and he worked for some years  on modernizing our family's coat of arms. An updating to a new and simpler design is one thing, but this would at the same time facilitate the making of future seal rings, not least where the price is concerned.

The illustration above to the very right became the final version. It contains, however, the right heraldic elements, i.e. the two stars and the rosette, and with the "super-elliptic" shape of the frame and the bottom of the shield it certainly is up to date and makes one think of the famous Danish poet, architect and designer, the late Piet Hein.