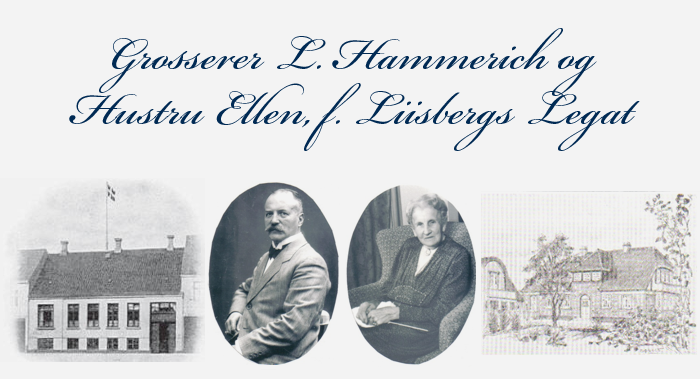 The foundation is based in Copenhagen, c/o the solicitor of the foundation, who also runs the day to day administration.

The foundation (Legatet) was founded in Aarhus on 3rd October, 1936 in memory of the late merchant Louis Hammerich (Pater) and his wife Ellen, née Liisberg (Mater). Louis Hammerich founded/took over the family business A/S L. Hammerich & Co. in 1884 and had a handsome career until he died in 1931.

However, ten children and a company in the middle of the recession of the thirties was quite a burden on a widow. Louis Hammerich's third son Paul Hammerich who at the time of his father's death served as a director in the company came up with the idea of a family foundation as the means of supporting the sporadic needs of a growing family and number of employees in the company. Unfortunately, Paul Hammerich died at the age of only 43, a few months before his ideas were carried out.

The initial capital of DKK 25,000 was donated to the foundation by the family-company.

The first board consisted of Louis and Ellen Hammerich's oldest son, captain commander Carl Hammerich, their son in law colonel J. D. von Stemann and the newly appointed director of the company, A. Filtenborg.