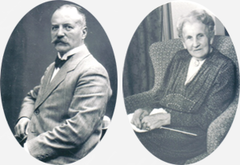 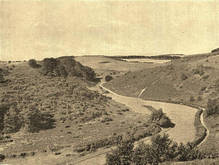 Provstgaarden is a typical Danish Mols farm from the middle of the 1870'es. Merchant Louis Hammerich (Pater) bought the property during the first world war and used the place as a holiday resort for his family. Farming and forestry were taken care of by a tenant farmer. Since the early twenties the tenant farmer was Frederik Petersen, who stayed at the place for more than forty years with his wife and family. In the mid-sixties he built a house in Femmoeller and went into retirement.

After Pater's death in 1931 his widow Ellen Hammerich (Mater) kept the property. In 1947 Mater donated the farm to the family foundation Merchant L. Hammerich and Ellen, neé Liisberg's Legat (founded in 1936) along with a pass book in the amount of kr.12,500 to provide for maintenance. 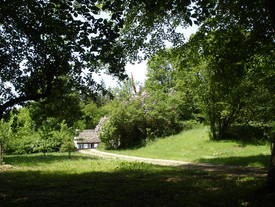 The farm is placed at the end of a steep drive from Provstskovvej. Above left the farm is seen from before World War II. To the right Haalen is seen in 1940. The areas around the farm have in recent years been cleared with grass, sporadic oaks and fruit trees as the main vege-
tation in the former vegetable garden, north of which the former hen house has been rebuilt by the tenant farmers to become a nice hunting hut, and also in the old fruit garden. On the hill south of the main house vest of the machine hut you can relax on a bench and enjoy a grand wiev towards south and south-west.

The buildings have since 1972 been used solely as the family's holiday and sparetime resort and consist of a main house, rebuilt after a fire in 1931, the original barn from 1875 and a stable, also rebuilt in 1947. All the buildings have a straw roof, the barn and main house are built half timbered. An extensive rebuilding of the main house and the bedrooms etc. in the stable from 1998-2001 has brought about a level of comfort that meets the expectations of most of today's holiday goers. Considering that before 1965 only the room to the right of the front door and the two bedrooms in the stable were available for the guests, and a few years earlier you had to do with water collected from the pump next to the machine hut and one of the two latrines behind the garage in the barn, a lot has happened over the years. In particularly dry summers the farm's well would dry out, and water had to be brought along with the milk route, by horse carriage that is. In those times water for hygienic use was strictly rationed, and the children were delighted, and when personal washing took place, it could be seen at the water. Since the early sixties the farm has had it's own water supply and the most delicious and clean water.

This is Mols in "the old days". The farm is shown in it's original lay-out as shown above left (the main house rebuilt). For those who have been coming here since World War II it was an eldorado of a holiday resort. In spite of the rather primitive conditions nothing could compare with Provstgaarden. Imagine, a real farm way out in the country. During the war some parents made the trip from Aarhus on bicycle with children on the carrier, later the kids made the bicycle ride themselves. In case of a nightly pig's birth one would gladly rise to be present, when Frederik under noice and yells took care of the practical things. Many vacations were spent at the farm, during winter often skiing, in the summer with friends and also at boy scout camps. 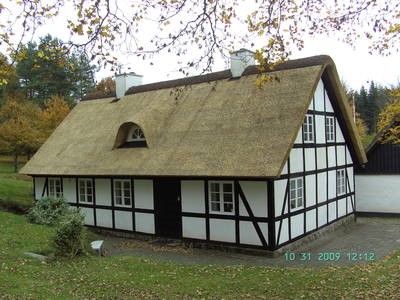 In September 2009 the main house had a new straw roof, a comprehensive and costly venture including inner fire protection. Hopefully this has not to be repeated within the next thirty years. Beautifully done by one of the best craftsmen in the trade.