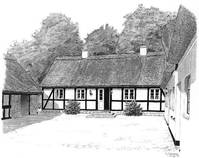 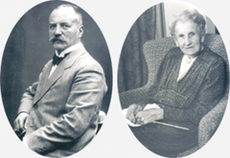 Provstgården was originally run as a proper farm  which combined with forestry earned the owner a modest income. Since Pater bought the place farming and forestry were taken care of by a tenant farmer. Since the early twenties the tenant farmer was Frederik Petersen, who stayed at the place for more than forty years with his wife and family. In the mid-sixties he built a house in Femmoeller and went into retirement. Farming on the smaller farms in the hills of Mols was far from lucrative and only possible if you led a modest life. In addition is was necessary to keep the children working at home and having them participating in all aspect of daily life. So they did, but the girls were sent off to earn a living at other farms right after their confirmation.

The photo above to the right show Provstgaarden from the south, and behind the two doors to the left were the old latrines which today serve as woodsheds. Late each night they were emtied by Frederik or one of his sons.

Since the Petersens retired from the farm it has been run less intensively in that modern machinery cannot operate in the steep terrain. Thus large parts of the property lie tallow today whiche years back became possible through public subsidiaries. Half of the barn now serves as tools and fodder depot for the tenant farmers. 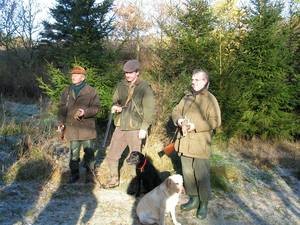 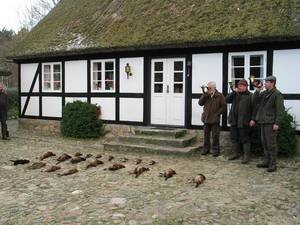 Mols hunting is often rewarding. Above left woodcock gamesmen are seen and right the game parade on November 20, 2004.